Your Too Small for That! 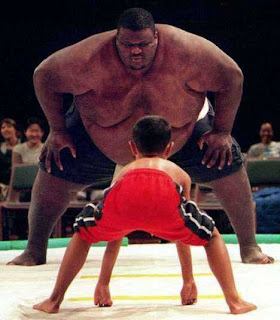 At first sight, many would say I am too small for that. In referencing to "that," I mean to be a future social worker, working with children in a urban community, children that some might say are too aggressive for me, or working in dangerous side of town.Yes, I am very small, can fit in a size 0 and yes my voice is soft and I don't look 23 but younger. I have been told my whole life that I would never make it in college as a social work major, and even by some family members who think urban children are too hard for me to work with them. Truth is, there might be "hard people" I will have to work with as a social worker. Being a social work in my undergrad years, I have work in a Spanish urban community and this summer work in a Black urban community. I have worked with parents who I never thought would listen to me because of the way I looked but has shown me respect and listen to my advice that could help them.

I think of David when his family thought he was too small to kill Goliath. But when he step up in front of Goliath, He said:


“You come against me with sword and spear and javelin, but I come against you in the name of the LORD Almighty, the God of the armies of Israel, whom you have defied. 1 Samuel 17:45.
﻿
That day there was a victory and young David defeated the giant.
﻿I know that I am small and look too young but I know that I am able to do all things. I know if God called me to work with a community that people would call dangerous, He will be with me. I have nothing to fear for my God is near and has prepare me to work with people in a urban community. If I let fear take over me then I will not be able to help people that can be over look because they are too "dangerous." I pray that you would not let what others say you can't do, control who you are. I know that I serve a mighty God and in Him all things are possible.
- August 19, 2011

Amen girl!!!! God doesn't call the equipped he equips the called!!! Don't let others discourage you because of your outer appearance. God is going to use you in a mighty way to reach the lost!!!