When I think of Christ I am amazed by Him. I am fill with joy knowing what He did for us, dying on the cross, taking on the wrath of God that was for us. I praise Him today and thank Him.

3For what I received I passed on to you as of first importancenthat Christ died for our sins according to the Scriptures, 4that he was buried, that he was raised on the third day according to the Scriptures, 5and that he appeared to Peter and then to the Twelve. 6After that, he appeared to more than five hundred of the brothers at the same time, most of whom are still living, though some have fallen asleep.

56The sting of death is sin, and the power of sin is the law. 57But thanks be to God! He gives us the victory through our Lord Jesus Christ. 58Therefore, my dear brothers, stand firm. Let nothing move you. Always give yourselves fully to the work of the Lord, because you know that your labor in the Lord is not in vain
- April 12, 2009 No comments: 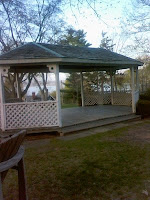 Abba, Your love is amazing and when I think of Your love, I can't help but stop and praise Your Holy Name. There is none like You. You are True, Holy, and Perfect. I can't believe that You would save me, that You would come down to save us on this earth. What an amazing God, You are. There is none like and nothing compares to You. I love You and so beautiful.
- April 02, 2009 No comments:

Joann Rosario - With All My Heart

Verse 1:In this quiet place with You
I bow before Your throne
I bare the deepest part of me
To You and You alone
I keep no secrets for there is
No thought You have not known
I bring my best and all the rest
To You and lay them down

Verse 2:
You faithfully supply all my needs
According to Your plan
So help me, Lord to seek Your face
Before I seek Your hand
And trust You know what's best for me
When I don't understand
Then follow in obedienceIn every circumstance